Anwar Ibrahim emulated Neo in Matrix. Anwar Ibrahim is real but his love is not.
Posted by sri tribuana at 12:17 AM 2 comments: 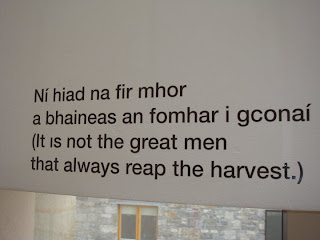 Posted by sri tribuana at 6:51 PM No comments:

To my surprise what he raised in his blog is the most fundamental one, the one that all bloggers forget or maybe dare not to ask. It is similar to the story of a naked emperor, only one small kid asks the most basic yet truthful and sincere question: why the emperor naked?

So fundamental, so basic but important and vital; Jebat Must Die need only 76 words plus 3 question marks. It's a stroke of genius and need a courage of a brave soul!


If Namewee (Wee Meng Chee) is prosecuted for his music-video, then two mixed messages are being sent out by the government: The first is that the authorities practise double-standards. The second is that it was only because of Namewee’s ‘intervention’ that the government sat up and took racism seriously.
On Wednesday, it was reported that the rapper was being investigated by the police for sedition. Various ministers and a menteri besar also want Namewee punished for his controversial video.
In the first place, Namewee made this clip because of the government’s slow response to tackle effectively the latest racist incident. It appears that we are now united, against racism.(How fast government act when Namewee insuledt national anthem and our flag? Can he easily forget Malaysian government's clemency?)
Far from being seditious or racist, Namewee has done the job of the government in exposing all that is ‘ugly’ about us.(This is funny!)
Just over two weeks ago, the Johore school headmistress featured in Namewee’s clip made serious, humiliating and crude remarks to non-Malay students in her school.
The prime minister, who coined the term 1Malaysia, took two weeks to make any comment regarding this issue. In the meantime, the damage became magnified.

Finally, Najib said that when it came to racism, he wanted ‘zero-tolerance’ and a ‘swift response’ to people who made racial slurs.
It appears that the prime minister has fallen at the first hurdle. There was not a quick, speedy response, as promised. It took him a very slow two weeks before issuing a statement.
For another, why has the police investigation been allowed to drag?
But let us imagine that for one moment, it was a non-Malay school head who had uttered derogatory remarks about her Malay pupils and told them to ‘pergi balik bawah tempurung’ (return to your place beneath your coconut shell) or that the tudung worn by the girls was only to cover-up their ‘bad hair-do’.(AG prosecuted malay blogger name Hasan Skodeng for insulting Che Khalib and TNB, but let Namewee free at his will to shoot another video clip to insult malay! Namewee too, insulted TNB before).

Wisdom and tolerance
I need not mention how the Malay community, egged on by the Ketuanan Melayu clowns, would react by picketing, protesting and practically foaming at the mouth.(So this statement is not racist?)
If anything, the Johore school incident proved that the non-Malay community has shown extreme restraint and should be commended for their wisdom and tolerance.
The shame is that few Malays voiced their objections to the disgusting remarks of the Malay school-heads (both in Johore and Kedah). Where are the voices of condemnation for these racist rants? Are they afraid of pilloried by members of their own community? Or have they no principles? And lack a conscience?
Namewee is reacting to the slow response of the government to tackle racism. Hence, it is the government who has failed the Malaysian public. It is Namewee who conveyed the important message to Malaysians, in an entertaining way via his Youtube clip, that ‘racism sucks’.( How irony!)
To date, what is the progress into the school-head investigation? How long does it take to get eye-witness statements?
People forget that Namewee is a rapper. He produces videos and music videos. Rap music may glorify violence, misogyny, drug abuse and homophobia. Profanity and vulgar language are common.(Yea, now  make fun of other race's religion is an art?)
Like it or not, rap or hip hop, is the language of the young these days. With rap, he has managed to engage with the young, to ‘say ‘no’ to racism’. Any parent of a teenager will know what I am talking about. The songs teenagers listen to these days, often colour the air-waves blue. (Unfortunately his anti-racism breed more racists, young chinese look up at him as hero even dare to say "Fuck Allah")
One can only imagine Namewee’s rage at the slow official response to tackle racism.
It is the same fury that overcomes us when we are lectured by our political masters to do, think and talk ’1Malaysia’ but then discover to our shock, that some ministers do not practise it.
Admittedly, Namewee is simply expressing his anger and frustration in creativity and music, just like Eminem or Jay-Z.
It is highly unlikely that our aging ministers will understand nor appreciate rap music.
Namewee is the perfect entertainer and has sound business acumen. Sometimes, to shock may even sell more records. He has gained increased publicity for himself being enterprising.(Maybe in the expense of racial tension)
Umno Youth chief Khairy Jamaluddin adopted a different spin on Namewee’s questions: “You tak baca? Siapa buat Malaysia kaya?” (Don’t you know? Who made Malaysia prosperous?). Khairy assumed that
Namewee suggested the ‘Malays played a minor role in Malaysia’s economic growth’.(Forget KJ, he's a foregone conclusion.)
Khairy is possibly wrong and as far as can be ascertained, Namewee wasn’t alluding to anything.
Namewee posed an open-ended question. However, political personalities are already scoring brownie points by insinuating various things.
Namewee was wrong to be abusive – even I would balk short at such behaviour. But Namewee speaks for all those who suffered that day in school and for the people in Malaysia who care.
Maybe if the authorities had been swift in their response, Namewee would not have had the reason to come up with this clip.(I agreed, if only those authority strip him from citizenship long time ago!)
The more potent danger
Actually, Namewee has done the job of the government much better that the government itself. It has given prominence to racism issues in a creative way and made us take a stand against racism. If not for his Youtube, clip, would we have taken as much attention? The problem is that the authorities have ‘lost it’.(So now we know what kind of minister we going to have IF PR take over the goverment - lots of Namewee kind!)
When Dr Chua Soi Lek criticised Namewee and said, “Freedom of expression should come with responsibility to consider sensitivities towards other races and religions”, he forgot that it was the two school principals who ignored sensitivities and caused a furore.
And instead of the school principals being censured, it is Namewee who is allegedly being charged with sedition. Namewee’s clip was crude and coarse, but not racist.(Ha ha ha, how true?)
This young disgruntled Malaysia’s response to racism has been blown into something of a racial firestorm. That is the more potent danger.
It seems that when you scratch beneath the surface, 1Malaysia is unraveling faster than a knitted jumper. One person condemns an irresponsible racist head, and the so called defenders of the race, react like beasts unleashed, and all for the wrong reasons.
Namewee has talent. He engages with the young via his rap music and lyrics. He should be nominated for a role in the Ministry for Information, Communications, Cul¬ture and Arts, to promote racial unity and other Malaysian issues.(He will produce lots more video clips insulting Malay and Islam, so this is so-called anti-racism?)
Far from creating disharmony, Namewee has united us against racism. He at least has the courage to tackle racism in his own entertaining way.(Don't forget your 'entertaining' hurt other race's feeling.)
Saya hairan bagaimana Mariam Mokhtar boleh menjadi penulis kepada Malaysia Mirror. Hujahnya terlalu cetek, berat sebelah dan buta kebenaran. Manusia seperti Namewee yang memulakan dahulu ketegangan kaum dan agama, lama sebelum isu ketegangan kaum ini hangat telah diangkat sebagai icon penyatuan anti-racism. Mungkin bagi DAP definisi anti-racism adalah 'boleh hina bangsa lain selagi bukan kaum Cina. Hina agama mereka juga.' Mana-mana Melayu yang sokong DAP tu, secara langsung atau tidak, insaflah segera.
Posted by sri tribuana at 5:50 PM 1 comment: